The Test Trenches Project involved arts practitioners working with sound, film, choreography and performance collaborating with archaeologists at the Ness of Brodgar in August 2010. This was followed by a week-long residency in the Pier Arts Centre, a contemporary art gallery in Stromness in January 2011. Elements from the Ness of Brodgar, such as excavation equipment and four of the carved stones recovered from the site, were brought into the gallery and set amongst installations in a range of media which were created during the week.

There was no brief for the project, and rather than aiming specifically to create finished works for display, visual experimentation was explored as a meaningful practice in itself. This process of ‘thinking-through-doing’ in the art gallery allowed more critical analysis of archaeological fieldwork and the products of that fieldwork, including in this case, artefacts which are often designated as art themselves.

The Ness of Brodgar

The Ness of Brodgar complex sits right in the centre of the Heart of Neolithic Orkney World Heritage Site, a dramatic monumental landscape which also includes the stone circles of the Ring of Brodgar, the Stones of Stenness, and the great chambered tomb of Maeshowe. Since 2007, the Orkney Research Centre for Archaeology (ORCA) has been undertaking open area excavation on the site directed by Nick Card (Card 2010; Card and Thomas 2012). Several monumental stone structures, all in excess of 15m long, have now been revealed and over 600 decorated and dressed stones, many of which were found in situ, have been recorded from the site.

In 2010, a series of Art and Archaeology workshops in Orkney led to discussions between Dan Lee, an archaeologist with ORCA, myself and Claire Pençak. Under the auspices of arts organisation Tabula Rasa, Claire was then undertaking a Creative Scotland Choreographic Fellowship in Orkney, taking the themes of Space, Place and Location as starting points (Claire Pençak pers. comm.). How could archaeology inform choreographic practice, and how could choreography inform archaeological practice? Claire and her team (designer and performance artist Brian Hartley, film-maker Glenda Rome and sound artist Bill Thompson) joined us on the excavations at the Ness of Brodgar in August 2010. They documented everyday details that we usually took for granted: the lines of buckets, the grids, orange twine and nails; the sounds, the performance.

In January 2011, the Test Trenches team regrouped to take up a week-long collaborative residency in the Pier Arts Centre, a contemporary art gallery in Stromness. Our aim was to continue the conversations started at the Ness of Brodgar, but as on site in the summer, there was no brief and there were no expectations. We began by bringing in some of the previous summer’s site into the gallery: Dan installed buckets and planning frames, rolls of orange nylon twine, 6-inch nails, hand shovels and brushes. Brian projected his site drawings onto the wall, creating a giant light-box to digitize his records of the excavation and layer them onto the gallery space. Glenda Rome also explored the displacement of site and gallery, recording and representation, by projecting one of her Super8 films through a paper installation arranged by Claire. 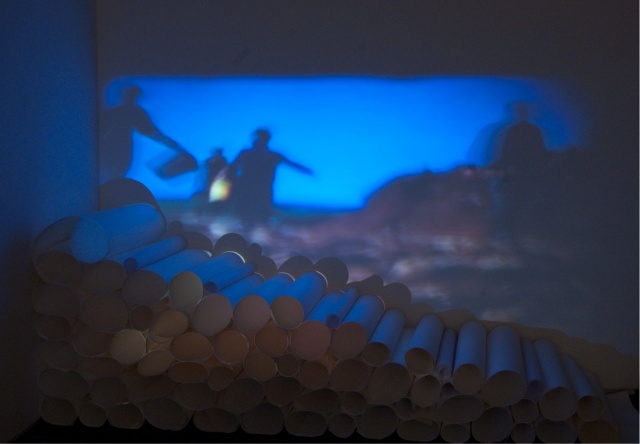 Dan and I brought in four of the carved stones from the site and arranged them on plinths in the Window Gallery, a glass-sided room which looks onto Stromness harbour. They were installed without display cases, contextual references or interpretation, and without their titles of SF2963; SF3133; SF4718 and SF7530. The stones could be examined in detail, yet without accompanying text, their display allowed the observer to be at once all-seeing and unknowing, whilst the labels and string that had accompanied the stones from site to gallery were carefully placed in Perspex cases in the next room, dislocated into a parallel space.

At the Ness of Brodgar, drawing often provides the first stage in my recording and understanding of the archaeological space and stonework. I wanted to understand the gallery space at an archaeological scale, to visualize the stones within their contemporary context. I prepared a drawing board with permatrace, marked grid points at metre squares on the floor with chalk, and started my plan of the Window Gallery. The plinths sat in the relatively large, open limestone-floored room, surrounded by a scattering of small objects: rolls of masking tape, 6-inch nails, half-empty coffee cups, pencils and pens spilling out of a case, drafting film, a hand shovel with brush, a Swiss Army knife, a hand tape whose tangled metal measure refused to wind back in, a camera case and some of Brian’s sketches. Minute details, such as tiny fossils trapped in the limestone of the floor, or areas where the tiles had been cut slightly differently, started to become apparent. This messy, multi-context assemblage did not suit the 1:20 scale of my archaeological drawing. In contrast to Brian’s freehand sketches of gesture and movement during the excavation, the measured plan of the gallery was clinical and detached. Yet even with a technical scale drawing, the close observation that comes with the hand-drawn record allows a subtle contextual engagement with the material, as body and space intersect with gesture and thought to create a new context. The process of drawing in the Window Gallery allowed me the time to slow down and move carefully around the carved stones, to see them from each side, to experience them from each angle. Subtle characteristics started to emerge.

At the start of January, while we were in the gallery, the Orkney sun rose in the northeast well after 9am, setting in the southwest around 3pm. The dramatically changing amount of natural light entering the space affected the exhibits as the low, arcing winter sun caused the focus to shift throughout the day. It is this quality which makes the Window Gallery one of the most interesting, but awkward, spaces to curate (Andrew Parkinson pers. comm.). The shifting sunlight in the gallery illuminated different characteristics of surface and techniques of working on the stones as it moved, creating a flickering, textured effect. The changing light throughout the day continually transformed the character of the decorated stones, and in turn affected and even choreographed my movement around them. On site at the Ness of Brodgar, it had become apparent during excavation that the appearance of the carvings on the in situ stones – in particular the ones exhibiting more ephemeral incised inscriptions – was similarly mutable. During the day’s fieldwork, the movement of the sun would cause entire walls to become suddenly illuminated, with panels of previously unseen carvings literally coming to light, often before passing very quickly into shadow and becoming invisible again.

Neither the open-air conditions of the excavation nor the gallery offer a direct parallel for how the stones would have been created or encountered within the Neolithic. Yet these observations highlight the relationship between the carved stones, their position, and the viewer; the symmetry (sensu Shanks 2007) between the creation of the inscriptions in the past, and the creative processes of discovering, recording and representing those stones in the present. The Window Gallery phenomenon exposed how light can work as a dynamic agent (Bille and Sorensen 2007) interacting with objects, both in the past and today. 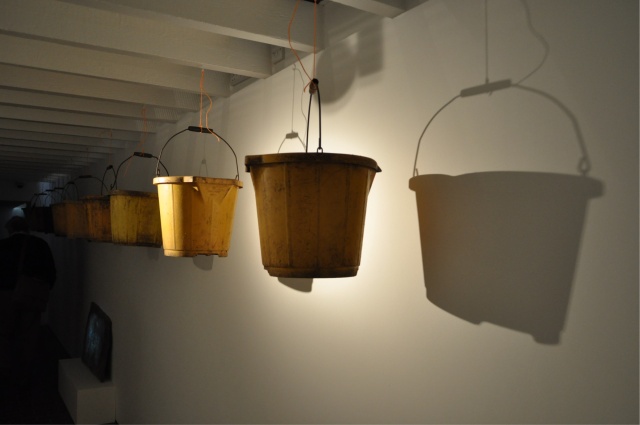 Bill’s media installation provided a continuous soundscape for the works. Mixed over three TV/DVD players and seven audio/mp3 players, the content was taken from digital film and sound recorded on site, of the archaeologists, the dancers on location, the artists behind the scenes, and his own sound explorations throughout Orkney. He mixed fragments of sounds with images, allowing them to mask the other as they moved across one another, injecting sound into the gallery. One image would affect another in ways that could be perceived but not predicted, providing an abstract and often, almost disturbing, audio-visual exploration of ‘layers’ and multiple contexts (Bill Thompson pers. comm.). Going far beyond representation in a traditional sense, his audio-visual installation comprised an assemblage of the people, things and space which make up the very essence of the Ness of Brodgar excavation, elements which are often fleeting, overlooked and unrecorded.

In another room, Dan, Glenda and I projected one of Glenda’s films of the excavation onto a large flagstone from the site, creating a stone screen for the flickering Super8 images. The projector and its connections were hidden from view, creating the uncanny effect of the excavation coming to life through the Neolithic slab. Not aiming to represent the archaeology, or present a document of the previous summer’s excavation, this piece explored the entangled temporalities of past and present on the site. The laminating Devonian Period flagstone, quarried in the Neolithic and disinterred in thetwenty-first century, began to slowly erode and flake off during the week revealing its different layers, whilst the film of the previous summer played through the rock. Time and place move at different scales through archaeological material, side by side but in conversation with one another as contexts shift and slide. Similarly on site, the nature of multi-context excavation means that several phases, several temporalities of inhabitation, can be visible at once; the archaeological process is one of continuous interaction with, and creation of, different layers of context.

As artists, archaeologists, choreographers and curators, we created a series of contexts both on site and in the gallery, running in parallel and in dialogue with one another. The carved stones occupied one room, whilst their constructed archaeological context of written labels and boxes, associated sounds and images, occupied a different space, as did the general matter of the excavation: the buckets, string, nails and frames. Fragments from the site were dislocated, and shifted slightly, allowing them to become catalysts for creative experiment and research. Each subsequent engagement and interpretation with archaeological material created a further shift in context, allowing further transformations to occur as the boundaries between archaeology, choreography and curating eroded.

This is an extract from ‘Creating Contexts: Between the Archaeological Site and Art Gallery’, a paper which is due to be published in 2014 in IA Russell & A Cochrane (eds), Art and Archaeology: Collaborations, Conversations, Criticisms. New York: Springer-Kluwer.

Card, N. and Thomas, A., 2012. Painting a picture of the Neolithic: decorated stonework from the Ness of Brodgar, Orkney. In Visualising the Neolithic: abstraction, figuration, performance, representation, eds. A. Cochrane and A.M. Jones, 111-124. Oxford: Oxbow Books.